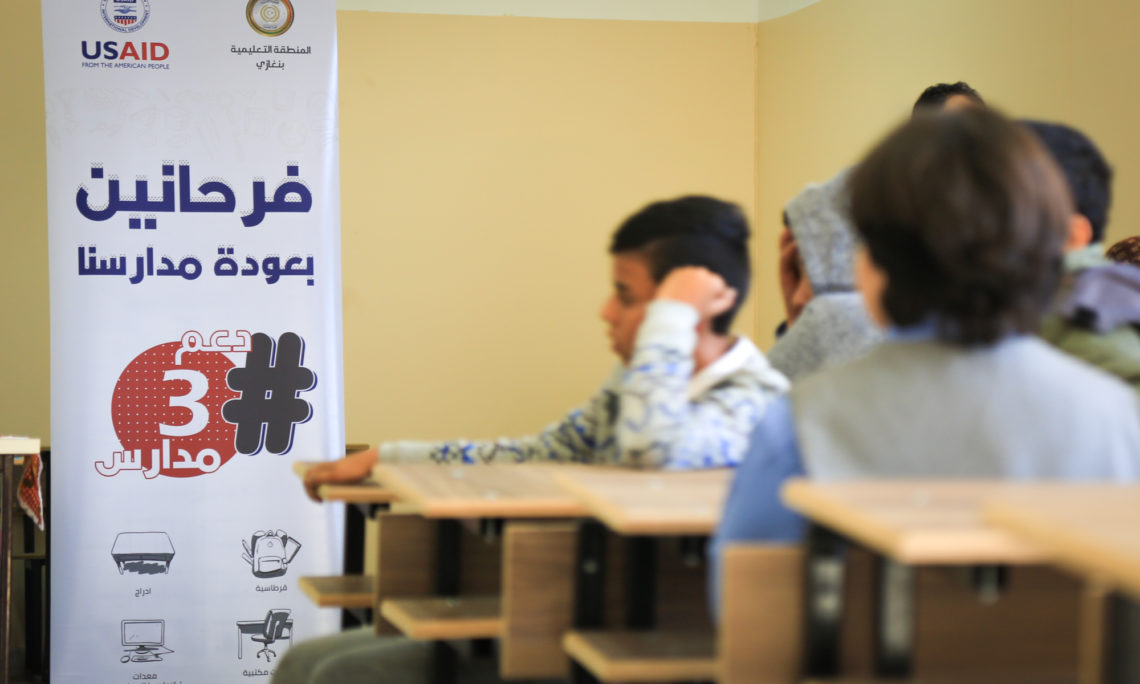 When students at three schools in downtown Benghazi returned to class last week, they found their classrooms now contained essential equipment like desks, whiteboards, IT equipment, and other vital supplies.  The equipment was provided by USAID to enable the resumption of normal operations at these schools, two of which were previously rehabilitated by UNDP’s Stabilization Facility for Libya (SFL), with support from USAID and other donors.  As the principal at one school said, “We are now equipped to provide education services for more than 500 students after our school being closed for years.”  Schools in Benghazi were badly damaged during the city’s prolonged three-year conflict, and their return to normalcy meets a critical need as the community continues to recover.  Explained another principal, “The impact of this support is more than receiving desks and stationery for our school. Based on this result we were able to open the opportunity for more than 350 students to register at our school who are mainly from the downtown area and were internally displaced in the past years.”  USAID is helping students across Libya by rehabilitating damaged schools and providing equipment to those most in need.

This assistance reflects the continued support of the United States for the Libyan people as they work towards peace, stability, and prosperity.  Since 2011, the US Government has provided over $450 million in humanitarian, stabilization, and development assistance across the country.  In October, USAID signed a Memorandum of Intent with the Libyan Ministry of Planning, establishing a broad framework for cooperation around priorities like strengthening governance institutions, increasing opportunities for economic participation and growth, and enhancing Libya’s ability to address instability and conflict. Additionally, USAID recently launched two new projects—one focused on promoting decentralization and civil society development, and the other on strengthening public financial management and economic governance. Both will work nationwide to the benefit of all Libyans.