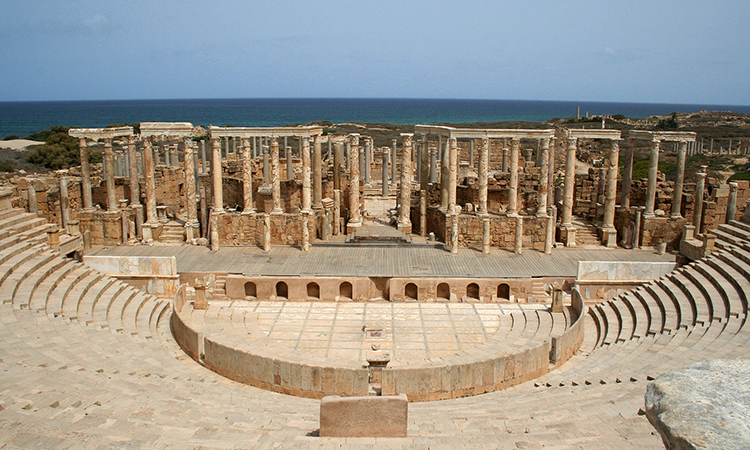 Remarks: Under Secretary of State for Public Diplomacy and Public Affairs Steven Goldstein and Libyan Ministry of Foreign Affairs Under Secretary for Political Affairs Lutfi Almughrabi

MS GRUNDER:  Good afternoon.  I am Alyson Grunder, the deputy assistant secretary for policy in the Bureau of Educational and Cultural Affairs at the U.S. Department of State.  Thank you for joining us today on this historic occasion.  This afternoon, Under Secretary of State for Public Diplomacy and Public Affairs Steven Goldstein, and Libyan Under Secretary of Political Affairs Lutfi Almughrabi will sign a memorandum of understanding between the Government of the United States of America, the Government of Libya, concerning the imposition of import restrictions on categories of archeological and ethnological material from Libya.

The State Department’s engagement in the safeguarding of Libya’s cultural heritage began in 2005, when through the Ambassador’s Fund for Cultural Preservation, we awarded our first grant to Oberlin College in Ohio for a project to preserve the archaeological and photographic collections of Cyrene, one of Libya’s UNESCO World Heritage sites.

Since that time, the ambassador’s fund has awarded nearly $950,000 for conservation and Department of Antiquities capacity-building projects across Libya.  The Oberlin projects have been springboards for complementary activities supported by the department’s Bureau of Near Eastern Affairs.  Workshops on methodologies for safeguarding cultural heritage and other similar activities have involved Libyan archaeologists, museum professionals, educators, and law enforcement officers in the United States, Italy, Tunisia and Libya.  These workshops have not only built capacity for Libya’s heritage managers, but they have also formed concrete and lasting professional relationships that will serve us well as we continue to combat the illicit trade in looted cultural objects from Libya and the North African region.

The agreement being signed today continues the commitment the United States and Libya have shown to protect and preserve Libya’s precious cultural heritage, while also providing a framework for our future collaboration.  I note that the United States welcomes the opportunity to enter into agreements similar to the one we are signing today with any country that is a party to the 1970 UNESCO Convention whose cultural heritage is in jeopardy from pillage.

UNDER SECRETARY GOLDSTEIN:  Thank you.  (Applause.)

Thank you very much.  It is my great pleasure to welcome Under Secretary Almughrabi and Ambassador Bughaighis on this very important occasion.  As under secretary of state for public diplomacy and public affairs, I am delighted to sign an agreement today that solidifies U.S. and Libya’s joint collaboration to combat looting and trafficking of cultural objects originating from Libya.

Today’s agreement is a testament to our shared commitment to protest Libya’s – to protect Libya’s cultural heritage, and more broadly, to full – offer full support for the United States – for the Government of the National Accord’s efforts to build a more stable, unified Libyan state.

Libya has served as a crossroads of multiple civilizations, each of which has left its mark on the country and our world history.  There is, however, a long history of threats to archaeological and historical sites in Libya.  And since the 2011 revolution, these threats have only increased.  The destruction of any of this history and culture is devastating.  We have documented looting at archaeological sites in Libya, some of which are listed as UNESCO World Heritage sites, and hundreds more remain in jeopardy from pillage and trafficking of their priceless antiquities.

Cultural property trafficking is a problem not just in Libya, but also throughout the Middle East and North Africa.  As we have seen in Iraq, Syria and neighboring Egypt, the pillage of archaeological and historical sites and the sale of antiquities and other cultural objects on the international market has bolstered the revenues of transnational organized criminal and terrorist groups.  Heritage sites that are hundreds and thousands of years old, a record of civilization over time, are rapidly being destroyed for cultural — for financial gain.

In the spirit of our close security partnership, the United States and Libya are committed to denying terrorists and transnational criminal groups access to this funding stream.  The United States has been unwavering in its commitment to protect and preserve cultural heritage around the world, and to prevent trafficking in cultural property that funds criminal and terrorist networks.  Our policy is clear:  The unlawful destruction of cultural heritage and the trafficking of cultural property are unacceptable.  The goals of cultural property agreements are, one: to reduce the incentive to pillage; two: to help countries protect their cultural heritage; and three: increase lawful access to cultural objects and awareness of world heritage by encouraging interchange of materials for scientific, cultural, and educational purposes.

The agreement we are here to sign today is the 17th cultural property agreement the United States has concluded with countries around the world facing threats to their heritage from pillage.  Today’s agreement demonstrates the joint commitment of the United States and Libya to ensuring that Libya’s heritage, of which Libyans are justifiably proud, will be protected and accessible for future generations to enjoy and appreciate.  The United States is committed to supporting the Libyan people’s efforts to build a more stable, unified, and prosperous future.  Today’s cultural preservation agreement is an important contribution to these efforts.  The international community is helping Libyans build a unified national government capable of safeguarding Libya’s resources, including its cultural resources, for the benefit of all Libyans.

There are many to thank for bringing this agreement to fruition.  Our greatest thanks go to the under secretary and the ambassador and the many dedicated Libyan officials and experts who have worked so closely with us to make this agreement a reality.  I want to commend the Bureau of Near Eastern Affairs, the Cultural Heritage Center, and the Bureau of Educational and Cultural Affairs, the President’s Cultural Property Advisory Committee and our colleagues at Customs and Border Protection, the Department of Justice, and the Department of the Treasury for their efforts in concluding this agreement.

When the – when the under secretary and the ambassador came into my office, I told them a – what I thought they might find sort of something interesting, and that is:  I was sworn in on December 4th, 2017.  This marks the end of my 12th week as under secretary of state.  The very first briefing that I had as under secretary was on this issue, and so it gives me great privilege and great honor to join the under secretary in being able to sign this agreement on behalf of the United States and the Libyan people, who so deeply care about these objects.  I’m now pleased to turn the podium over to Under Secretary Almughrabi.

UNDER SECRETARY GOLDSTEIN:  My pleasure.

UNDER SECRETARY ALMUGHRABI:  (Via interpreter) Under Secretary Steven Goldenberg, deputy — Under Secretary of State for Public Diplomacy and Public Affairs, ladies and gentlemen interested in the affairs of Libya, friends of Libya, ladies and gentlemen.  In the framework of cooperation between Libya and the United States of America, and in continuation to the tangible results of the visit of Mr. Fayez al-Sarraj, the prime minister of the national accord, to the United States of America in the beginnings of last December, I am pleased today to sign the historical memorandum of understanding, which will be in effect for five years, to protect the cultural heritage of the state of Libya.  I would like to offer my gratitude to everyone who participated in bringing this memorandum of understanding, which took work of approximately one year and three months, and we all realize that this was an arduous technical job participated in by a number of academic and archaeological specialists from both sides, Libyan and American, under the auspices of the Office of Public Diplomacy and Public Affairs in the United States Department of State, and with participation from our embassy in the United States of America, and the coalition to protect archaeological heritage.  Our thanks also go to Ms. Catherine Foster and Mr. Stephen Epstein, and Ms. Tess Davis, and all working in the Department of Near East and Arab Maghreb in the Department of State.  I also would like to thank our embassy in Washington for their diligent work in preparing this memorandum of understanding.  I would also like to reiterate our thanks to the Government of the United States, in general, for its continued support to the public – to the Libyan people and the National Accord Government.  And we hope that this achievement and continued cooperation and bilateral cooperation under this agreement is another step in protecting our country, its heritage, from pillage and theft.

Ladies and gentlemen, it is no secret that pillage, theft, and trafficking of archaeological material from some countries, including Libya, which has a great wealth of archaeological and cultural heritage that goes back thousands of years, has become one of the most important sources of financing for terrorist groups and criminal organized – organized groups, which took advantage of the opportunity to loot our archaeological heritage, sell it all over the world.  Under the difficult security situation in Libya and the political division, the country lost much of its archaeological and cultural wealth.  The Government of National Accord worked through its Ministry of Foreign Affairs and the archaeological authority all over Libya to work together to work with a number of countries to recover whatever is recoverable.  However, this is not an easy matter.  I have arrived here after a visit to Spain, where a number of archaeological – Libyan archaeological artifacts were located, and we’re working on recovering them.  Our focus now is on bringing back stability and security to Libya and cutting all routes of financing to terrorist groups and criminal groups in order to eradicate them and end their presence.

Once again, I repeat my thanks to the United States – Government of the United States of America as a government and people for their limitless support in helping my country counter terrorism and bringing back stability and supporting the political – a political solution and political accord.  And I reiterate my thanks to everyone who participated in bringing about this memorandum of understanding, and I reaffirm our commitment with the 1970 UNESCO Convention – the 1970 UNESCO Convention on the Means of Prohibiting and Preventing Illicit Import, Export and Transfer of Cultural Property.  Thank you for being a good audience.  (Applause.)

(The memorandum was signed.)