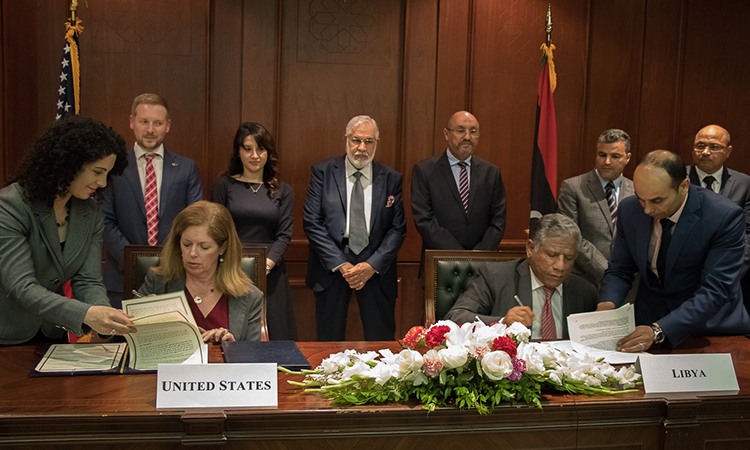 On April 27, Charge d’Affaires Stephanie Williams and Libyan Under Secretary for Political Affairs Lutfi Almughrabi signed a Memorandum of Intent for airport security, and a Letter of Agreement to support Libyan policing, corrections and justice sector development, in the presence of Libyan Foreign Minister Mohamed Siala and hosted by Ambassador Maaloul at the Libyan Embassy to Tunisia.  Charge Williams and Foreign Minister Siala reaffirmed their commitment to the UN Action Plan for Libya. These signings demonstrate the continued commitment of the United States to political reconciliation, security and stabilization in Libya.

Thank you to Ambassador Maaloul, for hosting us at the Libyan Embassy in Tunis.  It is a pleasure to be here and to meet Foreign Minister Mohamed Siala, and Under Secretary for Political Affairs Lutfi Almughrabi, who are accompanied by the Director of the MFA Americas Department, Mr. Elgnnas, the Director of the Legal Affairs Department Mr. Aljadi, his assistant Mr. Saleh, the Head of the North America Desk Mr. Aljerbi, and the legal adviser of the Minister of Justice Mr. Hamuda.

Today, we are pleased to sign and announce several agreements with the Government of National Accord that define our mutual commitment to improving the security situation across Libya.

First, we signed an agreement to work together in the policing, corrections, and justice sectors.  We also signed a Memorandum of Intent designed to enhance airport security in Libya. This effort is part of a broader bilateral strategy to improve security and reduce vulnerability at Libyan airports and land borders.

Together, the United States and Libya are also cooperating with regional partners to counter terrorism and bolster security across the Maghreb.  To that end, we are pleased to announce Libya’s membership in the Trans-Sahara Counter Terrorism Partnership (TSCTP).  This partnership will provide new opportunities for Libyan officials to engage with counterparts across borders to improve security in Libya, the region, and the world.

All of these initiatives are critical to bolstering security and addressing current threats across Libya.  However, the only lasting solution for Libya is to overcome its political impasse.  The United States strongly supports United Nations Special Representative of the Secretary-General Dr. Ghassan Salamé as he works to facilitate dialogue, improve governance, and help Libyans prepare for credible and secure elections.  As a friend and partner, we call on all Libyans to work constructively with the UN to this end.

As we embark on these initiatives, we also recognize the exceptionally difficult circumstances Libyans continue to face on a daily basis.  We are heartened by the commitment of Libya’s security and justice officials to confront these challenges.  We also welcome the Government of National Accord’s efforts to combat terrorism, to end unlawful detentions, and its pledge to investigate allegations of trafficking in persons and to bring those responsible to justice.  We will continue to support UN programs and the work of our European partners to combat human smuggling in Libya.  Today’s agreements will also guide U.S. bilateral assistance to build Libyan capacity in these areas.  As demonstrated by the agreement and memorandum signed today, the United States is committed to supporting Libya in your efforts to build security, stability, and a more prosperous future for all Libyans.