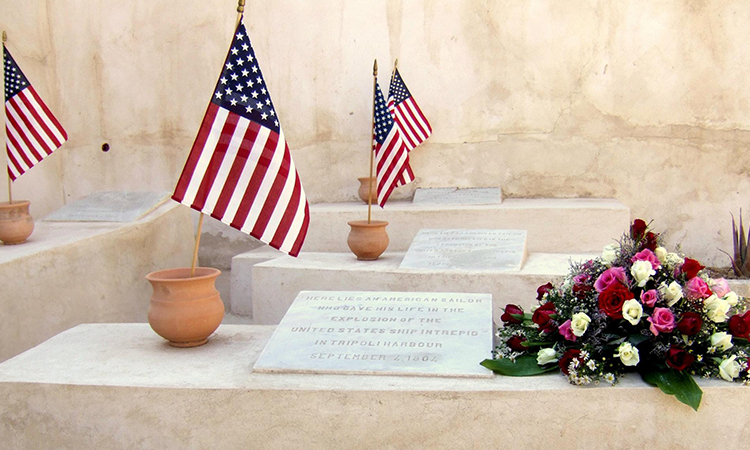 The Protestant Cemetery in Tripoli, also known as the American Cemetery, holds the remains of heroes from the Barbary Wars (1801–1805), the United States’ first overseas war. In September 1804, Lieutenant Richard Somers loaded his ship, the U.S.S. Intrepid, with explosives and set out to destroy the Bey of Tripoli’s fleet and batter the castle’s walls. His objective was to rescue the crew of the captured U.S.S. Philadelphia, which the Bey had taken as war prisoners. Somers and twelve volunteers perished in a massive explosion several hundred yards from their target.

With the Bey of Tripoli’s permission, the remains of five sailors, which washed up on the shores of Tripoli, were interred at the first Christian cemetery in Tripoli. In 1830, the people of Tripoli moved these remains to the present cemetery.

Today this cemetery is known as the American Cemetery. American and European diplomats established this cemetery to bury members of Tripoli’s nineteenth-century diplomatic corps. There are currently fifty-two other graves and tombs in the enclosure, which contain the remains of diplomats and foreign visitors who passed through nineteenth-century Libya. Several U.S. diplomats and their family members are buried here.

The 2004 Normalization Agreement between the United States and Libya established the cemetery as United States property, with the Libyan government agreeing to provide legal protection for the site. In 2010, Libya’s Department of Antiquities began restoration of the site in consultation with the U.S. Embassy.

The American Cemetery is an important symbol of the long history between the two countries. As Article 11 of the Treaty of Tripoli signed by President John Adams on June 10, 1797, famously states, the United States of America “has in itself no character of enmity against the laws, religion, or tranquility of Mussulmen [Muslims],” sentiments which have important meaning in today’s world as well as when they were written.
Learn more about the Secretary of State’s Register of Culturally Significant Property here: http://fundtoconserve.org/wp-content/uploads/2016/10/final_obo_secreg_web-2.pdf
News
Emergency Assistance
U.S. Citizens with Emergencies