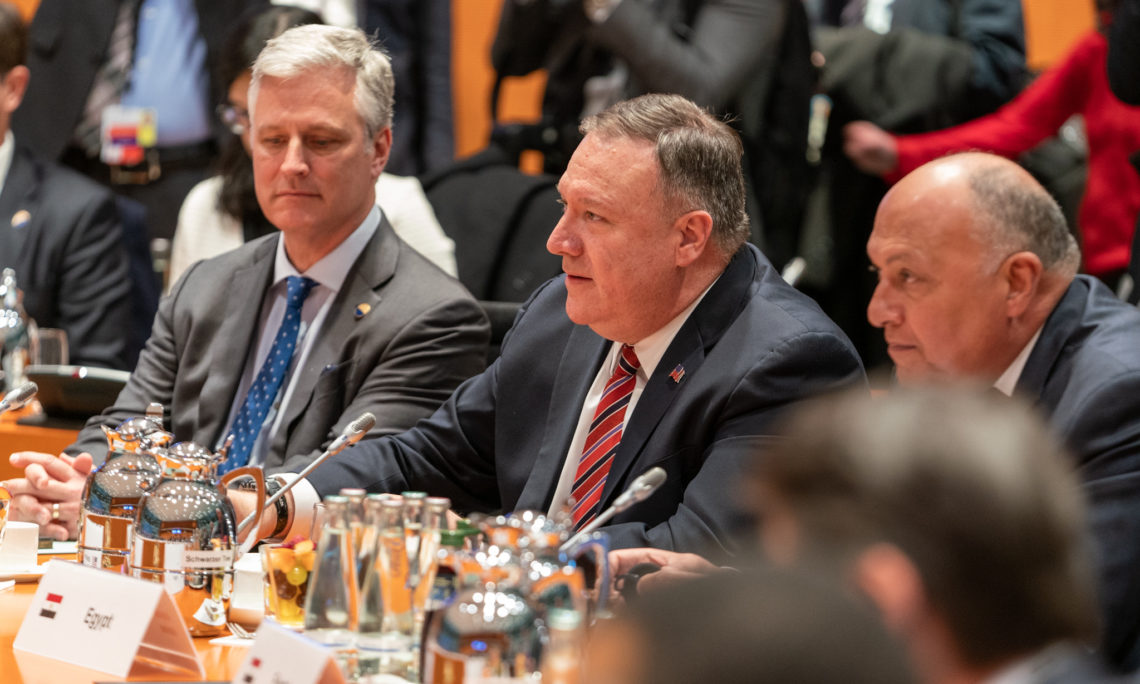 SECRETARY POMPEO: So just a couple things, then I’m happy to take a few questions. First of all, I’m sure you’ve seen the reporting from Colombia that there was a ship that had an accident. There was a person underneath the chief of mission control who’s missing and presumed dead, a very unfortunate accident. We’re notifying next of kin, and I just want to express my deep concern about this. It was a terrible event.

Second, I just left the Berlin gathering where we had most of the parties who have the capacity to improve the lives of the Libyan people. There was progress made towards a full-fledged ceasefire, a truce, temporary stand-down. There’s still a lot of work to do. It’s a complicated battlefield. But you had President Erdogan, President Putin, Chancellor Merkel, all making a sincere commitment; Special Representative Salame who’s running the UN (inaudible) making a sincere commitment and said we’re going to do this – we’re going to reduce risks, we’re going to conduct the ceasefire. Still some questions about how well and how effectively we can monitor this, but I’m optimistic that there will be less violence and there’ll be an opportunity to begin the conversation that Special Representative Salame has been trying to get going between the Libyan parties – much more likely today than it was before this meeting. So I’m appreciative of what Chancellor Merkel was able to do.

And then finally, I’m looking forward to the trip. We’ll have a – we will start off with a meeting with President Duque and then move into the reason for the trip, which is a counterterrorism gathering put together by nations from – leaders from all across South American countries, talking about how we’re going to counter terrorism and how we’re going to work on this together.

So with that, happy to take a handful of questions.

MS ORTAGUS: Wait, that’s not how we do it here. We’ll go around and everybody gets one question each.

QUESTION: Mr. Secretary, hi, hello. How – what – how big of a priority is Libya for President Trump? What is the U.S. prepared to do? Are you prepared to militarily engage if it comes to that? And if Hiftar seizes Tripoli, would you recognize him as the legitimate leader?

SECRETARY POMPEO: Well, we never get out in front of things we will do or the things we won’t do. America has a counterterrorism interest there. There are important energy opportunities there in Libya. One of the things I did mention is that we hope that the closure that had taken place – the closure of some of the crude oil getting out – we hope that will be opened up as a result of this conversation as well. And we’re committed to a political resolution, as we have been for a long time, and we’re implementing U.S., United States’ efforts, diplomatic efforts to achieving that outcome.

QUESTION: Mr. Secretary, there’s been some reports that President – that President Guaido is going to be in Colombia. Are you planning to meet with him and what are your goals with regards to Venezuela as it relates to Colombia?

SECRETARY POMPEO: Yeah. Well, we hope he’ll be there. When we have leaders and we’re talking about counterterrorism in South America, he’s the duly elected leader in Venezuela; we hope he’ll join us and I look forward to having a meeting with him. Our mission in Venezuela hasn’t changed. We are convinced that the Venezuelan people deserve a better 2020 than they had in 2019. Maduro has been destructive. He – you have millions of people who have to flee the country to the very country I’m headed to, to Colombia. Our mission set is to continue to work through all the diplomatic channels to achieve the outcome that President Trump laid out now about 18 months ago.

QUESTION: Can you talk about some of the ideas that were discussed about enforcing a ceasefire in Libya, and was there a commitment to the UN arms embargo from various sides?

SECRETARY POMPEO: Yeah, so we talked a lot about the UN arms embargo and the fact that there are many nations that are violating that. There was lots of conversation about how it is we’ll get these various participants who have been providing weapons systems that have been fueling this conflict, and the need to unwind that. I think we made progress, at least progress in getting fewer new weapons systems, fewer new forces to flow into the region, so that we can get at least a standstill so that we can begin to unwind this potential tragedy and get to the political resolution that I know everybody that came there today wanted to achieve.

QUESTION: And the monitoring of the ceasefire?

SECRETARY POMPEO: Yeah, I’m going to let Chancellor Merkel talk about that. I hope that she’ll have something that she can announce tomorrow.

QUESTION: Back to on Venezuela.

QUESTION: Would you agree with what has been said by Abrams that the U.S. underestimated Russia and is – are you prepared to sanction Rosneft? And how much of a setback would you say the National Assembly violence that we saw in the past week is for the goal there?

SECRETARY POMPEO: I think everyone understood that the challenge – the challenge of restoring democracy to Venezuela – was going to be difficult. I don’t – I can speak for most of the folks that I deal with every day around the world: We all knew this would be an enormous challenge, that Maduro would not go away easily. We’ve made real progress. If the Cubans will stop propping him up – and we’re working to convince them that this is not in the Cuban people’s best interest – and if those around him from a security perspective will ultimately make the conclusion that Venezuela is better off with Maduro having departed, then I think we can get our objective. But I – everybody wants to know the day and the hour. We don’t know the day and the hour. What we know is we can help the opposition continue to congeal, continue to build forces. They represent the Venezuelan people, and our mission set is to deliver a set of free and fair elections to the Venezuelan people so that they can have a presidential election that represents them and we can begin to put the Venezuelan economy back on its feet and get it going in the right direction.

QUESTION: I just wanted to clarify: Has the State Department opened its own investigation into the security of Ambassador Yovanovitch when she was in Ukraine? And can you clarify some —

SECRETARY POMPEO: Sorry, did who open their own investigation?

QUESTION: Has the State Department opened its own investigation? And something you said on some radio shows last week about not communicating, not knowing Lev Parnas. Can you say that you knew what he was tasked with as an associate of Rudy Giuliani on behalf of the President personally, while he was in Ukraine?

SECRETARY POMPEO: I’d never heard of Lev Parnas until this all became public.

QUESTION: And about the investigation?

SECRETARY POMPEO: Anytime there are allegations that some officer of the State Department is at risk, we take a look at it. We’re committed to that and we’ll keep doing it. Sometimes we resolve these things very quickly – we conclude that what we thought might have been going on wasn’t going on and we can end it quickly; sometimes we need to do more. We don’t talk about it in detail in terms of what we’re actually doing. But I want every one of the members of the State Department team to know that if there are allegations that someone is doing something that might put them at risk, the State Department takes those allegations seriously and we’ll do our best not only to figure out what’s real, but to make sure that they’re safe and secure.

MS ORTAGUS: Okay. Thanks, everybody.

SECRETARY POMPEO: Great. Thanks, everybody.

SECRETARY POMPEO: Have a great trip. Just another couple of hours.