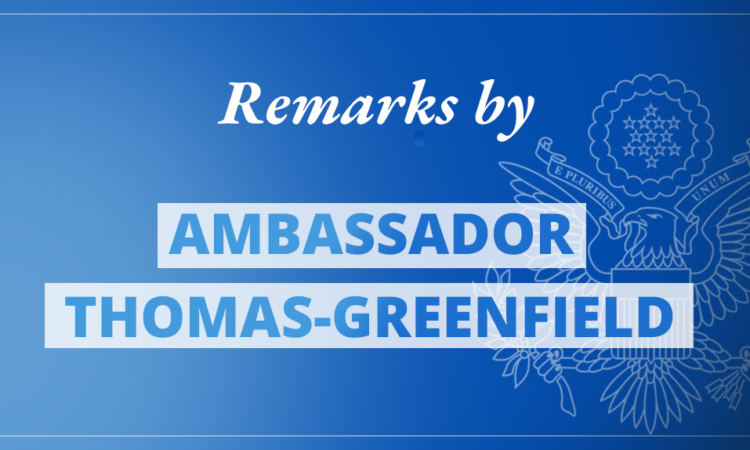 Thank you, Mr. President, for chairing today’s meeting. And thank you to Special Envoy Kubis for your very, very useful briefing. I would like to join others in welcoming the presence of the Cabinet Minister from Kenya, the Minister of Foreign Affairs from Tunisia, the Libyan Prime Minister, Foreign Minister from Germany, and the Secretary-General of the Arab League.

Mr. President and Council members, a political solution in Libya is possible. It is necessary and it is urgent. But it requires elections on December 24, as planned. Parties must come together to ensure that happens by putting needed legal and constitutional frameworks in place. National elections will advance both democratic progress and Libyan unity, by allowing the seven million Libyans throughout the country to have a voice in shaping Libya’s future. These elections must not be delayed. The electoral process must be Libyan-owned, Libyan-led, and free from foreign interference or malign influence.

Many of us here participated at the Second Berlin Conference a few weeks back. We were pleased to see such a robust turnout, including the participation of the interim Libyan government itself. Berlin was successful in demonstrating a resounding commitment to support national elections on December 24, echoing Resolution 2570, adopted unanimously by this Council in April.

It is clear that the international community expects national elections to take place – as agreed to in the roadmap adopted by the Libya Political Dialogue Forum. To go from roadmap to reality, constitutional and legislative arrangements must be adopted. I can’t say that more clearly. In recent weeks, we have seen the LPDF continue discussions on the path forward to elections, under the facilitation of UNSMIL and Special Envoy Kubis. He has described for us today those efforts and he has called on all parties to do the necessary to achieve the elections. It is essential that the members of the LPDF rededicate themselves to these discussions.

This Council must also continue to support efforts to resolve the issues surrounding military de-escalation and call for the immediate departure of foreign forces and mercenaries. We must again stress the importance of full implementation of the ceasefire agreement. Which, as Mr. Kubis has stated, threatens the ceasefire. A Libyan-led, Libyan-owned ceasefire monitoring mission will have an important role in verifying the departure of mercenaries and eventually other foreign forces. To that end, we are encouraged that the Joint Military Commission is developing its plans for the ceasefire monitoring mechanism in consultation with UNSMIL – including the small number of observers already deployed.

The international community clearly and fully supports the Libyan people on their road to national elections. Now, we must do everything we can to help ensure potential spoilers – both internal and external – do not derail months of hard-fought progress. Mr. President, in this final stretch, it is incumbent upon all of the parties to support the Libyan people.