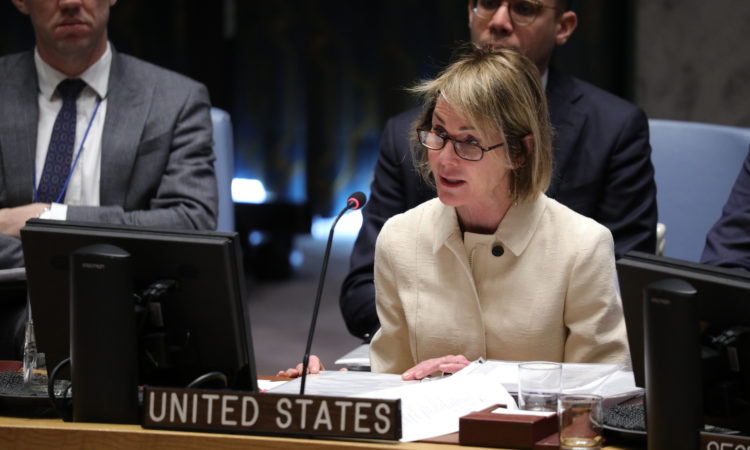 Thank you Mr. President. Thank you Special Representative Salame for your update on the increasingly alarming situation in Libya.

Less than two weeks ago, international leaders gathered in Berlin, where they called for a sustained ceasefire, and clearly committed to support effective UN monitoring when a lasting ceasefire is achieved and reject toxic foreign interference in Libya. The United States looked to Berlin Conference participants to abide by their commitments they made to maintain a truce and support renewed UNSMIL-led negotiations. Regrettably, the promise of the Berlin Conference is already under threat.

During today’s briefing, we learned of further blatant violations of the UN arms embargo, including the deployment of foreign fighters and mercenaries, and the delivery of weapons, ammunition, and advanced systems to the parties from member states. This includes – and I must stress this – several countries who participated in the Berlin Conference.

It is past time for those who have violated existing Security Council Resolutions – including the UN arms embargo on Libya – to face real consequences. These egregious violations worsen an already volatile situation in Libya, deepening the pain and hardship faced by ordinary Libyans on a daily basis. They must stop.

We join the UN in calling on countries to live up to their Berlin commitments and we demand that Member States comply with their obligations to implement the UN arms embargo. This entails an immediate and permanent halt of all deployments of personnel, fighters, and military equipment to Libya. We also call on Libyan parties to honor the fragile truce they themselves respected over the past few weeks. Engagement in UNSMIL’s planned 5+5 talks will be an important signal of how dedicated each side is to reaching a solution that avoids even more unnecessary bloodshed. Both parties need to commit to participating.

While working toward a ceasefire is a critical step, it should not be the end goal. We cannot turn our attention away from Libya as 5+5 discussions are launched. Any ceasefire must create space for serious and concrete discussions among Libyans about how to resolve the issues and how, and that have fueled the conflict. Among these difficult tasks, extremist militias must be dismantled, Libya’s economy must be rooted in transparency and the rule of law – to the benefit of all Libyans – and no groups or spoilers should be allowed to hijack the political process.

Looking further ahead, we continue to urge all sides to participate in UNSMIL’s planned intra-Libyan political dialogue, to include finalizing their representation, with women and youth leaders, as soon as possible.
A political solution for this conflict will require an inclusive, Libyan-led, and Libyan-owned process. In light of the recent developments, we reiterate here that no group should be allowed to hijack Libya’s national oil production. It is the Libyan people who suffer when the country’s revenues collapse. The disruption of Libya’s oil production has already caused electricity and water shortages; shortages in fuel and cooking oil will likely soon follow. The current blockade on Libya’s oil production must be lifted. Moreover, threats to civilian lives and aviation must end, and displaced people must be allowed to voluntarily and safely return to their homes in a sustainable and dignified manner. It is unacceptable that they have not yet been able to do so.

There is an urgent need to reaffirm the truce agreed upon in Berlin and to convert it into a lasting ceasefire under UN supervision. On these points, we should all be able to agree. As parties to the Berlin Conference affirmed, the Libyan people deserve to determine their own future, free from toxic foreign interference. It is this Council’s responsibility, indeed, our mandate, to enable UNSMIL and Special Representative Salame to help them do just that.