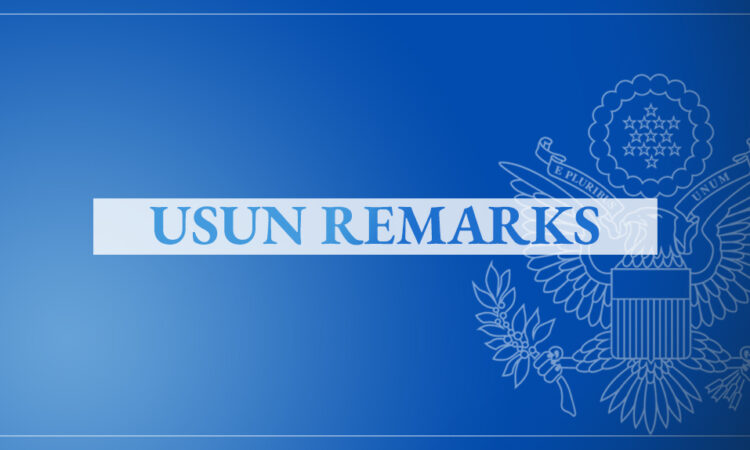 Thank you, Madam President. Thank you, Under-Secretary-General DiCarlo, for your briefing today. We commend the work of UNSMIL and Special Advisor Stephanie Williams during the last month to get the political process back on track and get Libya once again moving toward elections after the postponement from their expected date of December 24. A special thank you to Ambassador Tirumurti for updating this Council on the important work conducted by the 1970 Committee. And thank you to Ms. Elham Saudi for your briefing and the critical work you do in Libya.

Today I’d like to focus on two broad topics: ensuring Libyan’s voices are heard through a free and fair election and encouraging the positive momentum in Libya’s security situation.

Two point eight million people have registered to vote in Libya. Over 2.5 million of them have collected their voter cards. These are people who clearly are ready to vote, who have demonstrated a serious commitment to elections. It is time for their will to be respected. It is time to move beyond backroom deals between a small circle of powerful individuals backed by armed groups, carving up spoils and protecting their positions. The Libyan people are ready to decide their own future.

Libyan ownership of the electoral process is foundational. Libya’s leaders must agree on a path forward that is credible and inclusive and then wholly commit to that path. Those vying to lead Libya must see that the Libyan people will only accept leadership empowered by elections, and that they will only tolerate so much delay. Given that expectation, Libya’s political actors must redouble their efforts to solve the difficult challenges surrounding elections and to do so with urgency. The mechanisms to reach solutions exist. The Libyan Political Dialogue Forum roadmap remains in place. All Libya’s leaders need is some courage – and a commitment to the security and prosperity of the Libyan people.

We believe the High National Election Commission, which has performed admirably in difficult circumstances, is a credible authority to implement an electoral plan. We urge UNSMIL to continue its strong support of HNEC, and we urge Libyan candidates and political groups to cooperate fully with HNEC to ensure electoral regulations are followed. And I want to remind those who would interfere with Libya’s elections or stoke violence that the Security Council may impose sanctions on anyone – Libyan or otherwise – who obstructs or undermines elections. If need be, this Council can and must target election spoilers to promote accountability.

Madam President, while we need renewed effort to restore momentum in the political process, encouraging developments are happening on the security and economic tracks. Tangible steps are being taken by Libyan leaders to explore reunification of the Libyan military. And the Central Bank of Libya is moving forward with implementation of a plan to reunify the bank. We support efforts to unify institutions, enhance transparency, and ensure the equitable distributions of resources among all Libyans.

The United States remains encouraged by the steady progress of the 5+5 Joint Military Commission as it implements its comprehensive Action Plan for the withdrawal of armed groups. We welcome the report that UNSMIL ceasefire monitors have begun their work and look forward to the full operationalization of the ceasefire monitoring component. We call on all states – including those on this Council – to adhere to United Nations Security Council Resolutions 2570 and 2571, and to support the immediate withdrawal of all foreign forces and mercenaries.

Finally, the United States welcomes progress toward the renewal of UNSMIL’s mandate. As noted in the report of the Independent Strategic Review, UNSMIL needs to be strengthened in order to deliver on its mandate. We credit the work of the United Kingdom in steering the mandate negotiations and look forward to adopting a resolution that gives UNSMIL the tools and direction it needs to support the Libyan people.