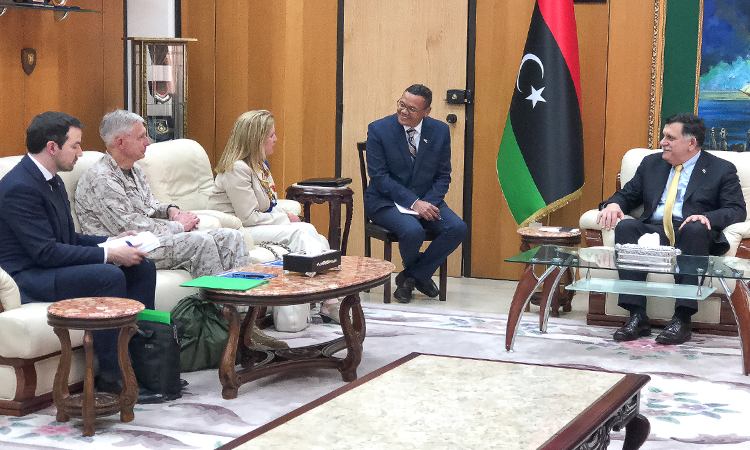 Today, my colleague AFRICOM Commander General Tom Waldhauser and I met with Prime Minister al-Sarraj and we reiterated our shared vision for a stable, democratic and unified Libya able to deliver prosperity for the Libyan people.  As our presence in Tripoli today testifies, the U.S.-Libya partnership is strong, rooted in our mutual commitment to advance political reconciliation in partnership with the United Nations, promote economic reform and closer economic ties between the United States and Libya, and defeat ISIS and other terrorists who imperil and threaten the safety and security of the Libyan people.

Our visit today represents a true strengthening of the U.S.-Libya strategic relationship.  Today’s meeting offered an opportunity to discuss a number of issues with Prime Minister al-Sarraj.  We know that the Libyan people want a safer, more secure country, so current bilateral security cooperation as well as potential defense institution-building efforts and security force assistance in the future were part of our discussions.  Over the last year, the United States has increased bilateral assistance to Libya to improve airport security, border security, policing, prison management, and demining capacity.  These efforts add to the United States’ contributions to humanitarian and stabilization assistance.  Since 2011, the United States has provided $635 million dollars to support Libya.  On April 27 in Tunis, I was pleased to sign an agreement with Ministry of Foreign Affairs Under Secretary Lutfi Almugrabi to work with Libya in the policing, corrections, and justice sectors.  We also signed a Memorandum of Intent to enhance airport security in Libya.  These efforts are part of a broader bilateral strategy to improve security and reduce vulnerability at Libyan airports and land borders.  The United States stands with the Libyan people as you pursue your goal of a safer, more secure country.

While these initiatives are critical to bolster security and address current threats, the only lasting solution for Libya is to overcome its political impasse.  The United States strongly supports United Nations Special Representative of the Secretary-General Dr. Ghassan Salamé as he works to facilitate dialogue, improve governance, and help Libyans prepare for credible and secure elections.  We welcome that Libyan leaders met in the presence of Special Representative Salamé and the international community in Paris earlier this week.  The United States believes that elections should occur as soon as possible, but must be well prepared to avoid further instability.  We support UN leadership as Special Representative Salamé consults with Libyan leaders to advance the process for adopting a constitution and charting a path forward to credible, secure and well-prepared elections.

We call on the international community to support the High National Elections Commission as it intensifies its work to prepare for elections.  The United States has invested more than $32 million since 2012 to support constitutional development and electoral preparations in Libya.

As we embark on these initiatives, we recognize the exceptionally difficult circumstances Libyans continue to face on a daily basis.  We are heartened by the commitment of Prime Minister al-Sarraj and Libyan officials to confront the country’s humanitarian challenges and advance the rule of law.  In this respect, we welcome the Government of National Accord’s investigation into allegations of trafficking in persons and its commitment to bring perpetrators to justice.  We will continue to support UN programs and provide U.S. bilateral assistance to build Libyan capacity to combat trafficking and support migrants.  As demonstrated by our presence in Tripoli today, the United States is committed to supporting Prime Minister al-Sarraj and the Libyan people in your efforts to build security, stability, and a more prosperous future throughout Libya.