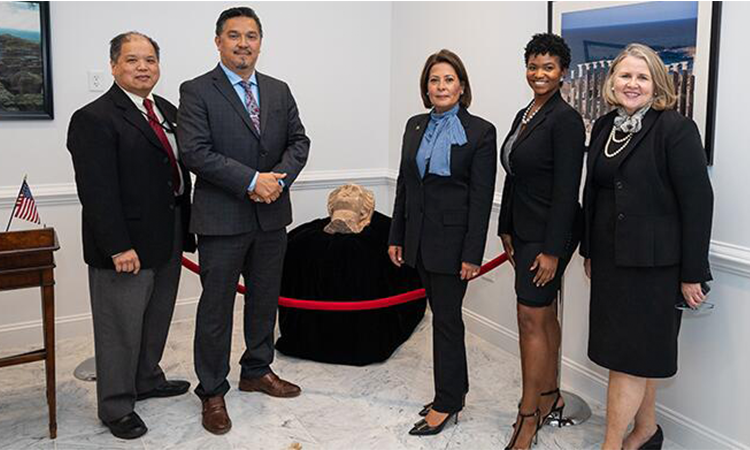 “As a federal law enforcement agency with a global reach, HSI is a leader in investigating crimes involving the illicit importation and distribution of cultural proper and art,” said Lin. “The theft and trafficking of another country’s priceless and irreplaceable national treasures is a global concern and this case shows that HSI is working every day to deny criminals the financial incentives that motivates their behavior.”

The return of the statue was the culmination of an 11-year investigation led by HSI New York’s Cultural Property, Arts and Antiquities Unit, in conjunction with the U.S. Department of State and U.S. Customs and Border Protection.

In June 2008, HSI New York initiated a cultural property investigation in response to information indicating that looted antiquities were shipped to the United States from Dubai. The investigation revealed an antiquities dealer illegally shipped 50 items of cultural property originating from various nations to major museums, galleries and art houses in New York City.

In August 2008, HSI seized the Libyan marble statue during its shipment from the Dubai-based antiquities dealer to a collector in Queens, New York. The seized statue is the fragmented head of a veiled woman statue that is measured 13 inches tall by 10 inches wide. Ongoing efforts in this investigation led to the identification of several key players in a transnational criminal organization, engaging in the illicit trafficking of cultural antiquities.

Thursday’s repatriation marks the first reparation ceremony between Libya and the United States.

“In today’s world, we face complex challenges where the looting of artifacts requires cooperation and understanding between nations. It is of vital importance to continue this relationship between Libya and the United States in order to preserve the cultural fabric of countries that are in danger of cultural racketeering,” said Libyan’s U.S. Ambassador Wafa Bugaighis.

Per Bugaughis, the statue originated in the ancient city of Cyrene, Eastern Libya, and is part of the rich cultural heritage amongst the Libyan community.

In February 2018, Libya signed a historical memorandum of understanding with the United States to protect Libya’s cultural property from illegal smuggling and highlight the principle that culture truly unites people.

With the signing of this agreement, reinforcing the fabric of shared history between countries, the United States and Libya have built a bridge of understanding, overcoming the forces of discord that threaten to divide our world.

HSI’s International Operations, through its 77 offices in 51 countries, works closely with foreign governments to conduct joint investigations, and is committed to pursuing a strategy to combat transnational organized crime related to the illicit trafficking of cultural artifacts by targeting high-priority organizations and strengthening international law enforcement partnerships.

ICE has recovered and returned approximately 12,000 artifacts to more than 30 countries since 2007, including paintings from France, Germany, Poland and Austria; cultural artifacts from China and Cambodia; dinosaur fossils from Mongolia; and illuminated manuscript left from Italy; a pair of royal Korean seals, ancient Peruvian ceramics, and most recently, an ancient gold coffin repatriated to Egypt.

Despite increasingly aggressive enforcement efforts to prevent the theft of cultural heritage and other antiquities, the illicit movement of such items across international borders continues to challenge global law enforcement efforts to reduce the trafficking of such property. Trafficking in antiquities is estimated to be a multi-billion-dollar transnational criminal enterprise.

Members of the public who have information about the illicit distribution of cultural property, as well as the illegal trafficking of artwork, are urged to call the toll-free tip line at 1-866-DHS-2-ICE or to complete the online tip form.