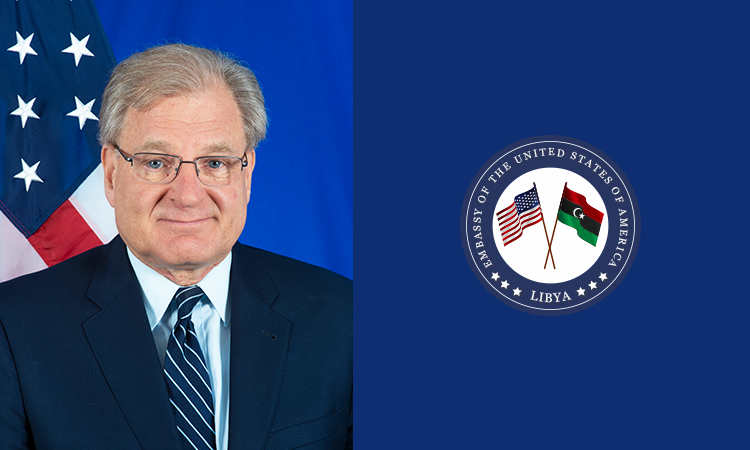 In recent months, the United States has redoubled efforts to end the fighting and support UN initiatives led by UN SRSG Ghassan Salamé to achieve a negotiated political solution to the crisis in Libya.  In close coordination with our international partners, we remain centered on the core belief that all Libyans deserve to live in peace and benefit from the country’s wealth. Here is an update on what the U.S. is doing to support international efforts currently underway to resolve the conflict in Libya.

The U.S. is engaged in two principal lines of activity in support of efforts to end the conflict in Libya.

On the external front, Ambassador Norland, joined by State Department Director for Maghreb Affairs Natalie Baker, on October 1 participated in the second meeting in Berlin of a working group organized under the auspices of the “Berlin Process” aimed at promoting a political solution to the conflict.  This meeting followed up a week of active diplomacy on the margins of the United Nations General Assembly in New York, including engagements by President Trump, Secretary of State Pompeo, Under Secretary of State for Political Affairs David Hale and Assistant Secretary of State for Near Eastern Affairs David Schenker with leadership from key countries interested in addressing the conflict.

The October 1 Berlin meeting was co-led by UN Special Representative of the Secretary General Ghassan Salame and included Egypt, France, Germany, Italy, Russia, Turkey, the United Arab Emirates, the United Kingdom and the United States, along with representatives of the African Union, the Arab League and the European Union.  Ambassador Norland had attended the first Berlin meeting, on September 17, and is scheduled to attend the next one.

Following the October 1 meeting, Ambassador Norland visited Algeria where he met on Oct. 4 with Foreign Minister Boukadoum, who offered the perspective of a neighboring state on how continued conflict in Libya is undermining the struggle against terrorism and hurting prospects for economic growth in North Africa.  Ambassador Norland held meetings in the United Arab Emirates on September 19, and Egypt on October 9-10 to gain support for the UN-led political process.  The Ambassador plans to travel to Russia and Turkey to deepen the conversation with those countries on common efforts to promote a political solution to the conflict.

On the internal front, the United States deplores the recent escalation in violence in Libya and remains committed to working with the international community and Libyan parties to end the conflict and provide the opportunity for normal life to all Libyans.    The U.S. remains committed to engaging politically with all parties to the conflict representing constituencies in the North, West, East and South, urging them to de-escalate from military activity and pursue their goals through exclusively political means.

The United States is committed to robust engagement with key Libyan economic institutions to reinforce Libyan institutional reform aimed at unification and transparency for the benefit of all Libyans.  The U.S. is focused in particular on maintaining the unity and integrity of the National Oil Corporation (NOC) and the Central Bank of Libya, which play a critical role in sustaining Libya’s economy and are currently under threat of being divided into western and eastern branches, placing Libya’s economic future in doubt and jeopardizing its prosperity.

In support of these efforts, National Oil Corporation leadership met with U.S. Department of Energy officials in Washington on September 10, and another meeting  planned in Washington this week, is expected to include senior-level representation from the Libyan National Oil Corporation, the Central Bank of Libya, the Ministry of Finance, and the Ministry of Planning.

These discussions focus on identifying mutually acceptable steps to enhance transparency and accountability of Libya’s economic institutions.  We look forward to hosting a follow-on, U.S.-facilitated Economic Dialogue in Tunis in late 2019 to further build on our shared vision for a stable and prosperous Libya.