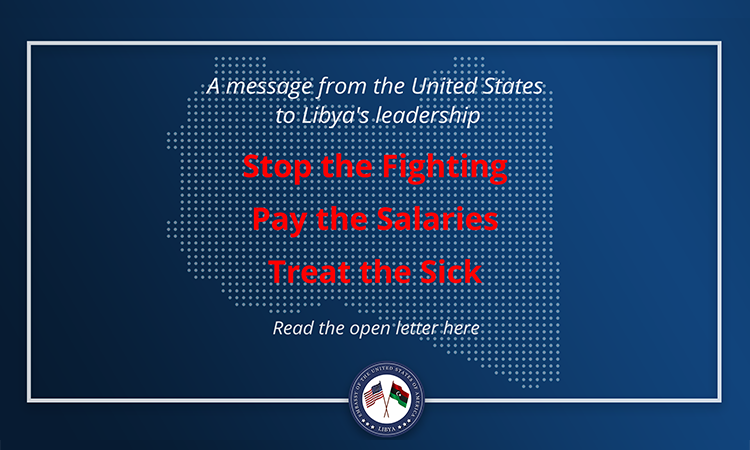 This is a public letter from the Ambassador of the United States to Libya, Richard Norland, to Libya’s political and military leadership and the people of Libya.

I am writing out of deep concern regarding a lethal threat to Libya that looms on the horizon. Without a robust, unified response, COVID-19 could rapidly provoke a widespread public health emergency, spreading sickness and death among the ranks of soldiers and civilians alike. We have not seen a global pandemic like this in over 100 years and ensuring that Libya survives it without catastrophic losses requires both courageous leadership and individual action. As I watch my own country contend with a dramatic surge in confirmed infections, I strongly urge Libyans to take these steps in advance of the expected outbreak:

Stop the Fighting: A halt in hostilities is an absolute necessity to provide public health authorities across Libya the opportunity to collaborate, in a spirit of national cohesion, to contain and overcome this outbreak. Unfortunately, contagious diseases thrive in war and this deadly viral pandemic could easily spread among those fighting on the frontlines and quickly overburden health facilities. Both Prime Minister Serraj’s Government of National Accord and Khalifa Haftar’s Libyan National Army have said they would abide by a humanitarian truce. Regrettably, while each side accuses the other of violating the truce, fighting has significantly escalated in recent days, endangering healthcare workers and distracting Libyans from the more urgent task of confronting our shared enemy, COVID-19. The best approach to concretize the humanitarian truce is for General Haftar to suspend his campaign on Tripoli, allowing both sides to return to the ceasefire framework established through UNSMIL’s 5+5 negotiations in Geneva. I further call upon both sides to announce an immediate freeze to the deployment of foreign fighters, who risk further spreading COVID-19 in Libya. The U.S. also recognizes that foreign actors are responsible for fueling the conflict, and is addressing that in diplomatic channels.

Pay the Salaries: Libyans need a steady source of income to cope with this crisis, and many Libyans depend on public sector wages. Unfortunately, since January, public salaries have not been paid regularly. Whatever the justifications for withholding disbursement, salary payments must resume immediately without conditions, prioritizing in particular health sector workers who are on the frontlines against COVID-19. Doctors and nurses should have the assurance that they are able to provide for their own well-being and that of their families. Additionally, restarting Libya’s oil production is critical to ensure Libyan authorities have access to sufficient revenue to pay salaries and foreign currency to procure much-needed medical equipment such as personal protective equipment, testing kits, oxygen, and ventilators. Furthermore, if Libya has any hope of securing international help after this virus strikes, there must be improvements made to institutions. Allowing an external audit of the Central Bank would be an easy move that would show the world that Libyan leaders are committed to transparency and fighting corruption; such an audit is ready to begin but for some reason it remains stuck. This can only hurt Libyans.

Treat the Sick: COVID-19 is highly contagious: anyone displaying symptoms should be isolated and treated in a safe location to prevent further contagion. The United States continues public health support to Libyan authorities, through our work with the World Health Organization (WHO) and a number of international NGOs. I am concerned that critical medical supplies procured by the WHO – including COVID-19 testing elements, protective equipment, antibiotics, and insulin – are stuck in ports in Tripoli, Misrata and Benghazi, due to delays from Libya’s Customs and Food & Drug Authorities. I call on relevant authorities to immediately release these supplies. Populations in Libya with irregular status, such as IDPs, migrants, and refugees should also be allowed access to healthcare at this critical time. Refusing these populations treatment will only further spread the virus among Libyans.

I share these thoughts out of America’s genuine concern for the well-being of Libyans and the stability of Libya. The United States has a long history of working with Libya to improve its health infrastructure and we will continue these efforts, but no amount of outside help can compensate for what Libyans themselves must do to confront this deadly virus.

While leaders will hopefully address the issues I’ve outlined above, I urge all Libyans to consult public information on COVID-19 from the World Health Organization (https://www.who.int) and Libya’s National Center for Disease Control (https://ncdc.org.ly/). COVID-19 has already infected over 500,000 and killed over 25,000 worldwide, it threatens the stability of entire nations and societies. We must all act in a spirit of responsibility, sacrifice and cooperation to confront and defeat this threat to our shared humanity.